Start a Wiki
Zeus is a male California Sea lion at Brookfield Zoo in Chicago, Illinois.  He was born early in the morning on March 6, 2015 to his mother, Sonoma, and is the result of a special breeding partnership between Oceans of Fun and the Chicago Zoological Society.

At birth, Zeus weighed in at 18 pounds.  He currently weighs around 100 pounds and will not reach his full maturity until he is 10 years old. 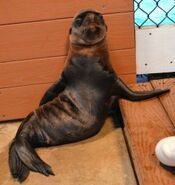 Zeus as a baby

Kanuk and Zeus in a training session.
Add a photo to this gallery
Retrieved from "https://animals.fandom.com/wiki/Zeus?oldid=60691"
Community content is available under CC-BY-SA unless otherwise noted.