The Woolly Mammoth was a species of the Mammuthus genus. The word "mammoth" comes from early 1800s Russian ма́мант mámant which is probably from a Uralic language, most likely from Proto-Mansi mē̮ŋ-ońt meaning "earth-horn". This animal is known from bones and frozen carcasses from Eurasia and northern North America with the best preserved carcasses in Alaska. They are perhaps the most well known species of mammoth. The species existed 400,000 years ago during the end of the pleistocene era, after they evolved from steppe mammoths. But later became extinct around 10,000 years ago, though a small population did survive into the early holocene as recently 1700 BC on an island off the coast of Siberia. The course of there extinction is unknown but it may have been a combination of climate change and being over hunted by early humans.

Woolly mammoths had a number of adaptations to the cold, most famously the thick layer of shaggy hair, up to 1 meter in length, with a fine underwool, for which the woolly mammoth is named. The coats were similar to those of muskoxen, and it is likely mammoths moulted in summer. They also had far smaller ears than modern elephants; the largest mammoth ear found so far was only 30 cm (12 in) long, compared to 180 cm (71 in) for an African elephant. Their skin was no thicker than that of present-day elephants, but unlike elephants, they had numerous sebaceous glands in their skin which secreted greasy fat into their hair, improving its insulating qualities. They had a layer of fat up to 8 cm (3.1 in) thick under the skin which, like the blubber of whales, helped to keep them warm. Similar to reindeer and musk oxen, their haemoglobin was adapted to the cold, with three genetic mutations to improve oxygen delivery around the body and prevent freezing. Fully grown male mammoths could reached from 2.7 to 3.4 meters tall & weigh 6 tons, females were 2.6 to 2.9 meters tall & were more lightly build then the males & weighed 4 tons. A new born calf would have weighed 90 kg, these sizes are deduced from comparisons to modern elephants of similar sizes. Pelvic girdles in females are wider then those of males, for a female to push & pass her calf through her birth canal. The tusks of a mammoth are long & curved they are present in both genders, the largest tusks are those of a male they were 4.2 meters long & weigh 91 kg, males usually have tusks that are 2.4 to 2.7 meters long & weigh 45 kg. Females have smaller & thinner tusks that average 1.5 to 1.8 meters long & weigh 9 kg, calfs have milk tusks which are no more then a few centimetres long at six months old, as mammoths reach adulthood there tusks grow by 2.5 to 15 cm each year. Adult mammoths could use there tusks to defend themselves against predators like wolves, cave lions & sabertooth cats, and to shovel away snow to reach to grass that’s underneath the snow. The trunk of a mammoth is similar to that of today’s Asian elephants and can be used in the same way, such as smelling for food and water, picking up food & objects, making noises & to display some behaviours.

Woolly mammoths preferred open grasslands & open Woodlands where they feed on grasses & other low growing plants, weather is in Eurasia or North America. Woolly mammoths living in Eurasia they would share there habitats with woolly rhinos, Irish elks & cave bears. While other populations living in North America would share there habitats with long horned bisons, dire wolfs, sabertooth cats & there relative’s Colombian mammoths and American mastodons.

Woolly Mammoths most likely lived like today’s elephants, females would live together in herds which is made up of mothers with calfs, aunts, grandmothers & sisters all lead by a matriarch. Where ever she goes they follow her, when ever she eats they eat too, adult males though live on there own but like modern elephants young males would come together to make bachelor groups, until there old enough to live on the own. When the high norths of North America & Eurasia got frozen over during winter times mammoths living in both regions will migrate further down south in those regions where there is less snow and ice & during summer times will return the northern parts of those regions.

Woolly mammoths are strictly vegetarians, for most of there lives they feed on low growing plants manly grass, as a mammoth feeds on grass it pulls the grass from the ground with its trunk, then put it in it’s mouth. The molars are specially designed to chew on tundra grasses along with flowering plants & mosses allowing the mammoth to feed on such planet matter. On occasions mammoths will feed on high growing plants such as leaves from bushes and trees, mammoths may have had to eat 450 kg of vegetation pre day like elephants do today. 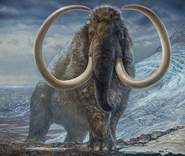 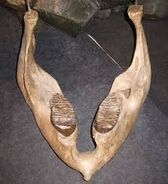 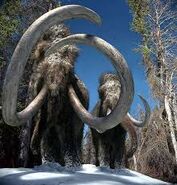 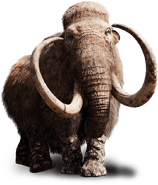