Start a Wiki
Tyrannosaurus rex was a theropod dinosaur and the most well known of all dinosaurs that onced lived in North America, from Canada to the USA and Mexico. From 68 to 65 million years ago at the end of the Cretaceous period. Tyrannosaurus was a member of the tyrannosaurians & the largest, and were the top predators of the ecosystems. Possibly able to take down prey like Triceratops, Pachycephalosaurus, Ankylosaurus, and Edmontosaurus.

They were large with small but strong two fingered arms, equipped with sharp & sickle-shaped claws. Males may have used there arms to hold on to females during mating. Is always been assumed that tyrannosaurs were scaly skinned, how ever the discovery of yutyrannus which had feathers suggests that t-rexes may have had feathers too. But recent studies show that t-rexes were indeed scaly skinned & there skins were similar to those of crocodilians. But they may have been mostly scaly skinned with hair-like feathers covering parts of the body. Most t-rexes grow 12 meters long but some would have reached 13 meters in length. A t-rex’s skull is huge & it’s snout & lower jaw were very deep. The whole mouth was massive and contained 60 serrated teeth, all them were different sizes with some up 20cm long. A tyrannosaur’s body was heavily built & it’s cavity was wide, to improve its mobility some of it’s vertebrae had holes that can help reduce weight to the animal. The hind legs of a t-rex were large & muscular which were connected to the body via a lizard-hip arrangement, the size of the legs would have gave the dinosaur an excellent pushing power. But due to it’s size & small strides it couldn’t have run too fast ( compared to other theropod-type Dinosaurs). The tail of a t-rex was used to balance is body horizontally & essential for chasing down prey.

A Tyrannosaurus rex could live around 30 years. 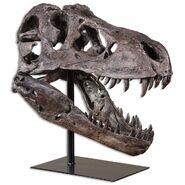 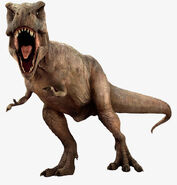 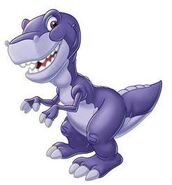 Add a photo to this gallery

Retrieved from "https://animals.fandom.com/wiki/Tyrannosaurus?oldid=74694"
Community content is available under CC-BY-SA unless otherwise noted.