View source
watch 01:36
We're Getting Mutants in the MCU - The Loop
Do you like this video?
Play Sound

The Thylacine (Thylacinus Cynocephalus) is an extinct species of marsupial that was native to continental Australia, Tasmania and New Guinea.

The thylacine resembled a large, short-haired dog with a stiff tail which smoothly extended from the body in a way similar to that of a kangaroo. Many European settlers drew direct comparisons with the hyena, because of its unusual stance and general demeanour. Its yellow-brown coat featured 13 to 21 distinctive dark stripes across its back, rump and the base of its tail, which earned the animal the nickname, "Tiger". The stripes were more marked in younger specimens, fading as the animal got older. One of the stripes extended down the outside of the rear thigh. Its body hair was dense and soft, up to 15 mm (0.6 in) in length; in juveniles the tip of the tail had a crest. Its rounded, erect ears were about 8 cm (3.1 in) long and covered with short fur. Colouration varied from light fawn to a dark brown; the belly was cream-coloured.[1] 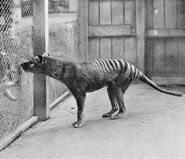 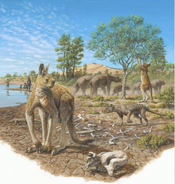