The Saltwater Crocodile is a specie from the Crocodylus genus. It is found in suitable habitats from Northern Australia through Southeast Asia to the eastern coast of India.

Saltwater crocodiles are the largest extant riparian predators in the world. However, they start life fairly small. Newly hatched saltwater crocodiles measure about 28 cm (11 in) long and weigh an average of 71 g (2.5 oz).[35] This distinct contrast in size between hatchlings and adult males is one of the greatest in terrestrial vertebrates.[citation needed] Males reach sexual maturity around 3.3 m (10 ft 10 in) at around 16 years of age, while females reach sexual maturity at 2.1 m (6 ft 11 in) and 12–14 years of age.[3] The weight of a crocodile increases approximately cubically as length increases.[36] This explains why individuals at 6 m (19 ft 8 in) can weigh more than twice that of individuals at 5 m (16 ft).[26] In crocodiles, linear growth eventually decreases and they start getting bulkier at a certain point.[37] Dominant males also tend to outweigh others, as they maintain prime territories with access to better, more abundant prey.

The largest confirmed saltwater crocodile on record drowned in a fishing net in Papua New Guinea in 1979, its dried skin plus head measured 6.2 m (20 ft 4 in) long and it was estimated to have been 6.3 m (20 ft 8 in) when accounting for shrinkage and a missing tail tip.[3][42] However, according to evidence, in the form of skulls coming from some of the largest crocodiles ever shot, the maximum possible size attained by the largest members of this species is considered to be 7 m (23 ft 0 in).[3][26] A governmental study from Australia accepts that the very largest members of the species are likely to measure 6 to 7 m (19 ft 8 in to 23 ft 0 in) in length and weigh 900 to 1,500 kg (2,000 to 3,300 lb).[43] Furthermore, a research paper on the morphology and physiology of crocodilians by the same organisation estimates that saltwater crocodiles reaching sizes of 7 m (23 ft 0 in) would weigh around 2,000 kg (4,400 lb).[44] Due to extensive poaching during the 20th century, such individuals are extremely rare today in most areas, as it takes a long time for the crocodiles to attain those sizes. Also, a possible earlier presence of particular genes may have led to such large-sized saltwater crocodiles, genes that were ultimately lost from the overall gene pool due to extensive hide and trophy hunting in the past.[citation needed] However, with recent restoration of saltwater crocodile habitat and reduced poaching, the number of large crocodiles is increasing, especially in Odisha. This species is the only extant crocodilian to regularly reach or exceed 5.2 m (17 ft 1 in).[29][32] A large male from Philippines, named Lolong, was the largest saltwater crocodile ever caught and placed in captivity. He was 20 ft 3 in (6.17 m), and weighed 2,370 lbs (1,075 kg). Believed to have eaten two villagers, Lolong was captured on 3 September 2011, and died in captivity on 10 February 2013.

The Saltwater Crocodile is the largest living reptile. They have a body length between 16 - 23 ft. can weigh up to 882 - 1,543 lbs. These crocodiles are grey or brown in color and have a broad, heavy set body and a large head along with short, yet strong limbs. Saltwater Crocodiles have a valve that seals off the mouth from the throat and this enables them to open their mouth while they are under water. However, they cannot eat their prey underwater as swallowing would allow water into their throat so they either have to drag their prey onto land or raise their head above the water to swallow.

As they swim, their legs are either held slightly out to the side, or flat against them because of all of their propulsion comes from their tail. Another feature of their tail is that it allows the crocodile to leap out of the water from a stationary position at the water's surface.

The Saltwater Crocodile feats mainly upon mammals, fish, and gnu but will eat anything that would come to the edge of the water. It kills by a deadly attack named the 'death roll', where the crocodile grabs the animal and rolls viciously to tear off chunks of it off.

The Saltwater Crocodile has a life of 70 years in the wild. 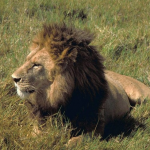 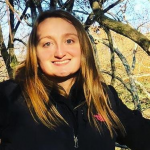 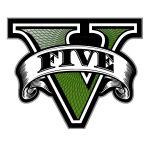 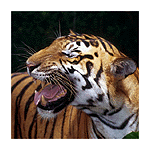