Pteranodon is a genus of pterosaurs which included some of the largest known flying reptiles, with wingspans over 6 meters (20 ft). It existed during the late Cretaceous geological period of North America. More fossil specimens of Pteranodon have been found than any other pterosaur, with about 1,200 specimens known to science, many of them well preserved with nearly complete skulls and articulated skeletons. It was an important part of the animal community in the Western Interior Seaway.

Pteranodon was a reptile, but not a dinosaur. By definition, all dinosaurs belong to the groups which exclude pterosaurs. Nevertheless, Pteranodon is frequently featured in dinosaur books and is strongly associated with dinosaurs by the general public.

Pteranodon species are extremely well represented in the fossil record, allowing for detailed descriptions of their anatomy and analysis of their life history. Over 1,000 specimens have been identified, though less than half are complete enough to give researchers good information on the anatomy of the animal. Still, this is more fossil material than is known for any other pterosaur, and it includes both male and female specimens of various age groups and, possibly, species.

Adult Pteranodon specimens from the two major species can be divided into two distinct size classes. The smaller class of specimens have small, rounded head crests and very wide pelvic canals,even wider than those of the much larger size class. The size of the pelvic canal probably allowed the laying of eggs, indicating that these smaller adults are females. The larger size class, representing male individuals, have narrow hips and very large crests, which were probably for display.

Unlike earlier pterosaurs, Pteranodon had toothless beaks, similar to those of modern birds. Pteranodon beaks were made of solid, bony margins that projected from the base of the jaws. The beaks were long, slender, and ended in thin, sharp points. The upper jaw was longer than the lower jaw. The upper jaw was curved upward; while this normally has been attributed only to the upward-curving beak, one specimen has a curvature corresponding with the beak widening towards the tip. While the tip of the beak is not known in this specimen, the level of curvature suggests it would have been extremely long. The unique form of the beak in this specimen lead scientist to assign it to a distinct genus, Dawndraco, in 2010.[4]

The most distinctive characteristic of Pteranodon is its cranial crest. These crests consisted of skull bones (frontals) projecting upward and backward from the skull. The size and shape of these crests varied due to a number of factors, including age, sex, and species. Male Pteranodon sternbergi, the older species of the two described to date, had a more vertical crest with a broad forward projection, while their descendants,Pteranodon longiceps, evolved a narrower, more backward-projecting crest. Females of both species were smaller and bore small, rounded crests. The crests were probably mainly display structures, though they may have had other functions as well.

Other distinguishing characteristics that set Pteranodon apart from other pterosaurs include narrow neural spines on the vertebrae, plate-like bony ligaments strengthening the vertebrae above the hip, and a relatively short tail in which the last few vertebrae are fused into a long rod. The entire length of the tail was about 3.5% as long as the wingspan, or up to 25 centimetres (9.8 in) in the largest males.

Traditionally, most researchers have suggested that Pteranodon would have taken fish by dipping their beaks into the water while in low, soaring flight. However, this was probably based on the assumption that the animals could not take off from the water surface. It is more likely that Pteranodon could take off from the water, and would have dipped for fish while swimming rather than while flying. Even a small, female Pteranodon could have reached a depth of at least 80 centimetres (31 in) with its long bill and neck while floating on the surface, and they may have reached even greater depths by plunge-diving into the water from the air like some modern long-winged seabirds. In 1994, Bennett noted that the head, neck, and shoulders of Pteranodon were as heavily built as diving birds, and suggested that they could dive by folding back their wings like the modern Gannet. 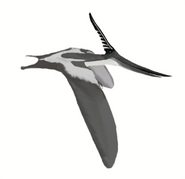 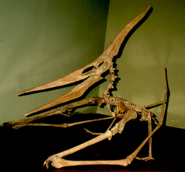