Pachycephalosaurus was discovered in hell creek foundation in the year 1931, it was the first pachycephalosaur ever to be discovered and described. It was thought to be an outdated troodon, but now we know that it was a plant eating dinosaur with a beautiful domed head.

Pachycephalosaurus is the largest member of the Pachycephalosaurid family and its cousins are Dracorex, Homalocephale, Microcephale, Prenocephale, Stegoceras, Stygimoloch, and Wannanosaurus. All species had dome-shaped heads and walked on two legs. 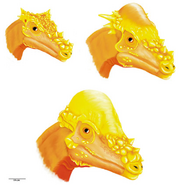 Add a photo to this gallery
Retrieved from "https://animals.fandom.com/wiki/Pachycephalosaurus?oldid=74265"
Community content is available under CC-BY-SA unless otherwise noted.