During the Late Cretaceous many oceans and big seas began to dry up. More advanced plants such as Pine trees began to grow. Massive lizard like mososaurs began to be the top predators of the seas and oceans eating plesiosaurs and even sharks. Tyrannosauroids such as Tyrannosaurus took over the place of allosauroids although there was one more in Brazil. Plant eaters such as Triceratops and Machairoceratops had horns that can protect them from attack. But some such as Edmontosaurus did not have amour but they were huge. While this pterosaurs such as Pteranodon began to grow huge sizes. Dinosaurs also began to leave Europe although a few still lived there. Then 65 million years ago a space rock possibly a asteroid or a comet smashed Earth killing many animals and plants in the planet. A few mammals survived and only one group of reptiles survived, and it was birds. Then the age of mammals began. 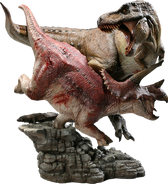 Mammals started taking over the age of dinosaurs.

Restoration of a Velociraptor

Restoration of Triceratops
Add a photo to this gallery

Retrieved from "https://animals.fandom.com/wiki/Late_Cretaceous?oldid=63633"
Community content is available under CC-BY-SA unless otherwise noted.