Guam Rails are rare and secretive birds with little known about them.

Unlike most rails, who are somber and solid in color, the Guam Rail has dark brown and white bars beneath a plain mantel of light brown shading to buff on the neck. A white eye stripe draws attention to the narrow, blackish bill. It has strong, medium-length legs and the long toes help them walk over grasses and soft marsh mud. Its narrow body is an adaptation for running through thick marsh grass, weeds, and underbrush.

Guam Rails are omnivorous, although they do prefer animals instead of plants. They generally eat food that is on the ground but are known to catch low-flying insects, including butterflies. They do most of their foraging at dawn and dusk.

Guam Rails are year-round ground nesters, producing up to 10 clutches a year with one to four eggs in each. Both parents build a shallow nest of grass and leaves hidden in dense grass. The downy black chicks are able to leave the nest within 24 hours of hatching, although both parents continue to feed and care for them. They grow very quickly, getting their juvenile feathers at four weeks and reaching their adult weight in just seven weeks. They are able to mate and reproduce at four months of age.

The median life expectancy for Guam Rails are 5.5 years for females and 9 years for males.

Although Guam Rails seldom vocalize, they do respond to disturbances with a loud, piercing whistle or series of whistles. During breeding season, the birds make loud, penetrating screeches and short kips.

Guam Rails are endangered due to introduced predators. 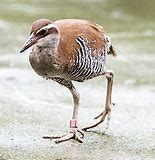 Hatchling
Add a photo to this gallery

Retrieved from "https://animals.fandom.com/wiki/Guam_Rail?oldid=65389"
Community content is available under CC-BY-SA unless otherwise noted.