The great white shark, Carcharodon carcharias, also known as the great white, white pointer, white shark, or white death, is a species of large lamniform shark which can be found in the coastal surface waters of all the major oceans. The word "shark" is of uncertain origin. It is most likely from a semantic extension from the German-dervied word shark/Schurke for a "scoundrel". The fish was traditionally called a dogfish or haye in English and Middle English. Older dictionaries derive the word from Latin c(h)archarias which is from Ancient Greek. Other older dictionaries speculate that the word derives from Yucatec Maya xoc meaning "fish" (/ʃok/). The great white shark is mainly known for its size, with the largest individuals known to have approached or exceeded 6 m (20 ft) in length,[3] and 2,268 kg (5,000 lbs) in weight.[4] This shark reaches its maturity around 15 years of age and can have a life span of over 30 years. The great white shark is arguably the world's largest known extant macropredatory fish, and is one of the primary predators of marine mammals. It is also known to prey upon a variety of other marine animals, including fish and seabirds. It is the only known surviving species of its genus Carcharodon, and is ranked first in having the most attacks on humans.The IUCN list the great white shark as a vulnerable species. They hunt vertically on crystal clear water at top speed 35 mph as take down elephant seals.

In 1758, Carolus Linnaeus gave the great white shark its first scientific name, Squalus carcharias. Later, Sir Andrew Smith gave it Carcharodon as its generic name in 1833, and also in 1873. The generic name was identified with Linnaeus' specific name and the current scientific name Carcharodon carcharias, was finalised. Carcharodon comes from the Greek words karcharos, which means sharp or jagged, and odous, which means tooth.

The great white shark came into existence during the mid-Miocene epoch. The earliest known fossils of the great white shark are about 16 million years old. However, the phylogeny of the great white is still in dispute. The original hypothesis for the great white's origins is that it shares a common ancestor with a prehistoric shark, such as the C. megalodon. Similarities among the physical remains and the extreme size of both the great white and C. megalodon led many scientists to believe these sharks were closely related, and the name Carcharodon megalodon was applied to the latter. However, a new hypothesis proposes that the C. megalodon and the great white are distant relatives (albeit sharing the family Lamnidae). The great white is also more closely related to an ancient mako shark, Isurus hastalis, than to the C. megalodon, a theory that seems to be supported with the discovery of a complete set of jaws with 222 teeth and 45 vertebrae of the extinct transitional species Carcharodon hubbelli in 1988 and published on November 14, 2012.[11] In addition, the new hypothesis assigns C. megalodon to the genus Carcharocles, which also comprises the other megatoothed sharks; Otodus obliquus is the ancient representative of the extinct Carcharocles lineage.

Great white shark off Guadalupe Island, Mexico Great white sharks live in almost all coastal and offshore waters which have water temperature between 12 and 24 °C (54 and 75 °F), with greater concentrations in the United States (Atlantic Northeast and California), South Africa, Japan, Oceania, Chile, and the Mediterranean. One of the densest known populations is found around Dyer Island, South Africa, where almost all of the shark research is done.

The great white is an epipelagic fish, observed mostly in the presence of rich game, such as fur seals, sea lions, cetaceans, other sharks, and large bony fish species. In the open ocean, it has been recorded at depths as great as 4,000 ft (1,200 m). These findings challenge the traditional notion about the great white as being a coastal species.

According to a recent study, California great whites have migrated to an area between Baja California and Hawaii known as the White Shark Café to spend at least 100 days before migrating back to Baja. On the journey out, they swim slowly and dive down to around 900 m (3,000 ft). After they arrive, they change behavior and do short dives to about 300 m (1,000 ft) for up to ten minutes. Another white shark that was tagged off of the South African coast swam to the southern coast of Australia and back within the year. This refuted traditional theories that white sharks are coastal territorial predators and opens up the possibility of interaction between shark populations that were previously thought to have been discrete. The reasons for their migration and what they do at their destination is still unknown. Possibilities that may support this idea include seasonal feeding or mating. A similar study tracked a great white shark from South Africa swimming to Australia's northwestern coast and back, a journey of 20,000 km (12,000 mi; 11,000 nmi) in under nine months.

The great white shark has a robust, large, conical snout. The upper and lower lobes on the tail fin are approximately the same size which is similar to some mackerel sharks.

A great white displays countershading, by having a white underside and a grey dorsal area (sometimes in a brown or blue shade) that gives an overall mottled appearance. The coloration makes it difficult for prey to spot the shark because it breaks up the shark's outline when seen from the side. From above, the darker shade blends with the sea and from below it exposes a minimal silhouette against the sunlight.

Great white sharks, like many other sharks, have rows of serrated teeth behind the main ones, ready to replace any that break off. When the shark bites, it shakes its head side-to-side, helping the teeth saw off large chunks of flesh.

A 2007 study from the University of New South Wales in Sydney, Australia, used CT scans of a shark's skull and computer models to measure the shark's maximum bite force. The study reveals the forces and behaviors its skull is adapted to handle and resolves competing theories about its feeding behavior. In 2008, a team of scientists led by Stephen Wroe conducted an experiment to determine the great white shark's jaw power and findings indicated that a specimen more than 6.1 m (20 ft) long could exert a bite force of over 18,000 newtons (4,000 lbs).

Great white sharks are carnivorous and prey upon fish (e.g. tuna, rays, other sharks), cetaceans (i.e., porpoises, whales), pinniped and seabirds. Great whites have also been known to eat objects that they are unable to digest. Upon approaching a length of nearly 4 metres (13 ft), great white sharks begin to target predominately marine mammals for food. These sharks prefer prey with a high content of energy-rich fat. Shark expert Peter Klimley used a rod-and-reel rig and trolled carcasses of a sheep from his boat in the South Farallons. The shark baits but rejected the seal carcass The great white shark's reputation as a ferocious predator is well-earned, yet they are not (as was once believed) indiscriminate "eating machines". They are ambush hunters, taking prey by surprise from below. Near Seal Island, in South Africa's False Bay, shark attacks most often occur in the morning, within 2 hours after sunrise, when visibility is poor. Their success rate is 55% in the first 2 hours, falling to 40% in late morning after which hunting stops.

Hunting techniques vary by species of the prey. Off Seal Island, the sharks ambush brown fur seals from below at high speeds, hitting the seal mid-body. They go so fast that they can completely leave the water. The peak burst speed of these sharks is largely accepted in the scientific community to be above 40 kilometres per hour (25 mph). However further precision is still speculative. They have also been observed chasing prey after a missed attack. Prey is usually attacked at the surface.

Off California, sharks immobilize northern elephant seals with a large bite to the hindquarters (which is the main source of the seal's mobility) and wait for the seal to bleed to death. This technique is especially used on adult male elephant seals which can be as large or larger than the hunter and are potentially dangerous adversaries. Prey is normally attacked sub-surface. Harbour seals are taken from the surface and dragged down until they stop struggling. They are then eaten near the bottom. California sea lions are ambushed from below and struck mid-body before being dragged and eaten.

White sharks also attack porpoises from above, behind or below to avoid being detected by their echolocation. Targeted species include dusky dolphins, harbour porpoises, and Dall's porpoises. Close encounters between dolphins and predatory sharks often result in evasive responses by the dolphins. However, in rare cases, a group of dolphins may chase a single predatory shark away in an act of defense. White shark predation on other species of small cetacean has also been observed. In August 1989, a 1.8 metres (5.9 ft) juvenile male pygmy sperm whale, Kogia breviceps, stranded in central California with a bite mark on its caudal peduncle from a great white shark. In addition, white sharks also attack and prey upon beaked whales.

In 1984, shortly before its opening day, the Monterey Bay Aquarium in Monterey, California, 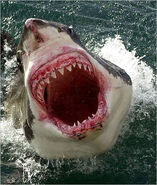 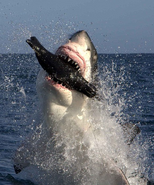 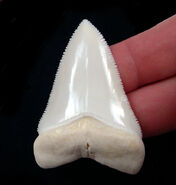