This article is a stub. You can help Animal Database by expanding it.

Dilophosaurus wetherilli is a genus from the Dilophosauridae family. It was a carnivorous dinosaur of the early Jurassic.

It had a thin, long tail, slender legs, and long arms that were used to capture prey. Dilophosaurus lived around 193 million years ago. It was about six meters long and weighed about 500 lbs. Studies by Robert Gay show no indication that there was a difference between male and female Dilophosaurus but says nothing about crest variation. The first skeleton was discovered in 1942 in Arizona.

The crests on it's head were used to attract mates. 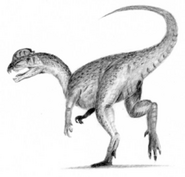