The carabao is a swamp type domestic Water Buffalo (Bubalus bubalis) found in the Philippines and Guam. Water buffaloes were most likely introduced to the Philippines by Malay immigrants in the period 300 to 200 BC. The word carabao and kalabaw in Filipino was derived from the Malay word kerbau.

Carabaos have the low, wide and heavy build of draught animals. They vary in colour from light grey to slate grey. The horns are sickle-shaped or curve backward toward the neck. Chevrons are common. Albinoids are present in the proportion of about 3% of the buffalo population. Mature male carabaos weigh 420–500 kg (930–1,100 lb), and females 400–425 kg (880–940 lb). Height at withers of the male ranges from 127–137 cm (50–54 in), and of the female from 124–129 cm (49–51 in). Water buffaloes imported to the Philippines from Cambodia in the early 20th century are called Cambodian carabaos. They have white or yellowish hair on a pinkish skin but the eyes, hoofs and mouth are dark, and the skin may be speckled. They are slightly bigger and have larger horns. Males weigh on average 673 kg (1,480 lb) and measure 141 cm (56 in) at the withers.

They have fairly long hair thinly covering their huge bodies, and a tuft of hair on the forehead and at the tip of the tail. Normally, they are silent and docile, but they will give a trembling snort if they are surprised.

Water buffaloes are well adapted to a hot and humid climate. Water availability is of high importance in hot climates since they need wallows, rivers or splashing water in order to reduce the heat load and thermal stress. Swamp buffaloes prefer to wallow in a mudhole that they make with the horns. Their objective is to acquire a thick coating of mud. They thrive on many aquatic plants and in time of flood will graze submerged, raising their heads above the water and carrying quantities of edible plants. They eat reeds, giant reeds, bulrush, sedges, water hyacinth and marsh grasses. Green fodders are used widely for intensive milk production and for fattening. Many fodder crops are conserved as hay, chaffed or pulped. Trials in the Philippines showed that the carabao, on poor quality roughage, had a better feed conversion rate than cattle.

The carabao cools itself by lying in a waterhole or mud during the heat of the day. Mud, caked on to its body, also protects it from bothersome insects. The carabao feeds mainly in the cool of the mornings and evenings. Its life span is 18 to 20 years and the female carabao can deliver one calf each year.

Malay immigrants probably introduced water buffaloes in the period 300 to 200 BC. Later Chinese colonizers also brought water buffaloes that are sometimes referred to as Shanghai buffaloes. Carabaos are widely distributed in all the larger islands of the Philippine archipelago. Early in the 20th century, water buffaloes were imported from Cambodia for work in sugarcane plantations. A descendant is called Cambodian carabao that is larger and has bigger horns. Murrah buffaloes were first introduced from India in 1917. A few representatives of the Nili breed have also been acquired. The word carabao is now used for the imported river type buffaloes as well as for the local swamp buffaloes.

Carabao hide was once used extensively to create a variety of products, including the armor of pre-colonial Filipino warriors.

In 1993, the Philippine Carabao Center was established to conserve, propagate and promote the carabao as a source of draft animal power, meat, milk and hide to benefit the rural farmers through carabao genetic improvement, technology development and dissemination, and establishment of carabao based enterprises, thus ensuring higher income and better nutrition. The National Water Buffalo Gene Pool located in the Science City of Muñoz is a facility for continuous selection, testing, and propagation of superior breeds of dairy buffaloes.

In 2003, there were 3.2 million carabao buffaloes in the Philippines, 99% belong to small farmers that have limited resources, low income and little access to other economic opportunities.

One of the many reasons for the failure of the attempted Japanese pacification of the Philippines during their 1941-1945 occupation was their indifference to the basics of the Filipino economy. The carabaos provided the necessary labor that allowed Filipino farmers to grow rice and other staples. Japanese army patrols would not only confiscate the rice but would also slaughter the carabaos for meat, thereby preventing the farmers from growing enough rice to feed the large population. Before World War II, there were an estimated three million carabaos in the Philippines. By the end of the war it is estimated that nearly 70% of them had been lost.

The old “payatak” method of farming is still the method of choice in Northern Samar. The soil of the rice paddy is first softened with rainwater or diverted watershed, then the farmer guides a group of carabaos in trampling the planting area until it is soggy enough to receive the rice seedlings. This time consuming task produces lower yields and lower income when compared with the advancement in irrigated fields. In the late 1980s, the carabao puppet character Kardong Kalabaw became popular as a symbol of the Filipino people's hard work and sense of industry.

Carabaos were introduced to Guam by Spanish missionaries in the 17th century from domestic stock in the Philippines to be used as beasts of burden. A feral herd on the US Naval Magazine in central Guam was classified as protected game. But the population has been declining since 1982, most likely due to illegal hunting. Carabaos were used for farming and pulling carts. They were fairly common in Guam before the 20th century, with a population numbering in the thousands. Today they are rare in most parts of the island except in the US Naval Magazine near the village of Santa Rita, which is fenced on all sides. The carabao population of Naval Magazine has grown to several hundred, to the point that they have become a pest and caused environmental damage, and polluted the water supply in the Fena Reservoir. In 2003, the Navy began a program of extermination to control the carabao population of Naval Magazine, a move that was protested by many Chamorro people.

The carabao is considered a national symbol of Guam. In the early 1960s, carabao races were a popular sport in the island, especially during fiestas. Today, carabaos are a part of the popular culture. They are often brought to carnivals or other festivities, and are used as a popular ride for kids. Carabao meat is sometimes eaten as a delicacy, although this is not common these days.

The Carabao is the official animal of the state of Negeri Sembilan, Malaysia. 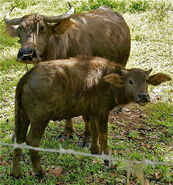 A Caraballa and her calf

Carabao cart
Add a photo to this gallery
Retrieved from "https://animals.fandom.com/wiki/Carabao?oldid=83402"
Community content is available under CC-BY-SA unless otherwise noted.