The black rhinoceros was once widespread south of the Sahara. The word comes from Latin rhinoceros which is from Ancient Greek rhinokeros. Now, fewer than 2,000 remain. It has been hunted almost to extinction for its horns, which are prized in China and the Middle East. For one horn, a poacher can earn twice what he would earn in a year as a farmer. The black rhino is now found only in heavily guarded nature reserves, but illegal hunting still continues. The Black rhinoceros or hook-lipped rhinoceros (Diceros bicornis), is a species of rhinoceros, native to eastern and central Africa including Kenya, Tanzania, Cameroon, South Africa, Namibia, Zimbabwe, and Angola. Although the rhinoceros is referred to as black, its colors vary from brown to grey.

The other African rhinoceros is the white rhinoceros (Ceratotherium simum). The word "white" in the name "white rhinoceros" is a misinterpretation of the Afrikaans word wyd, itself derived from the Dutch word wijd for wide, referring to its square upper lip, as opposed to the pointed or hooked lip of the black rhinoceros. These species are now sometimes referred to as the square-lipped (for white) or hook-lipped (for black) rhinoceros.

The species overall is classified as critically endangered, and one subspecies, the western black rhinoceros, was declared extinct by the IUCN in 2011.

The species was first named Rhinoceros bicornis by Carolus Linnaeus in the 10th edition of his Systema naturae in 1758. The name means "double-horned rhinoceros". There is some confusion about what exactly Linnaeus conceived under this name as this species was probably based upon the skull of a single-horned Indian rhinoceros (Rhinoceros unicornis), with a second horn artificially added by the collector. Such a skull is known to have existed and Linnaeus even mentioned India as origin of this species. However he also referred to reports from early travellers about a double-horned rhino in Africa and when it emerged that there is only one, single-horned species of rhino in India, "Rhinoceros" bicornis was used to refer to the African rhinos (the white rhino only became recognised in 1812).

The intraspecific variation in the black rhinoceros has been discussed by various authors and is not finally settled. The most accepted scheme considers seven or eight subspecies, of which three became extinct in historical times and one is on the brink of extinction: 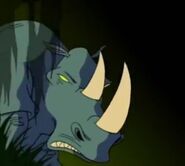